Now I have the hang of attaching pics there will be no stopping me.
The queue is forming outstide the bodyshop and the A5 has been joined by B3 Valour.
A5 is a craftsman kit and Valour is scrathbuilt from a Nick Campling drawing that was in the Railway Modeller in the early 80's.
I started making Valour whilst working in Saudi and I left there in 1983,,,[cripes thats 24 years ago]!!!
I really must make a concerted effort to finish some of these projects off now I have a suitable venue for them to strut their stuff.
Both above have Romford/Markit wheels and Portescap motors,,, bloomin expensive but lovely smooth running has it's price I suppose.
SAD @ Salmon Pastures
Posted by Salmon Pastures at 19:21 No comments:

Another attempt at attaching some pics!!! If at first you don't succeed!!!
Maybe I as trying to attach too many at the same time,,, anyway,,,, what you are looking at is a general view taken from Citadel Steels entrance over the wall into the main shed.
As you can see the A5 is yet to attend the paint shop along with numerous of it's stable mates,,, but we will attempt to get a few more loco's finished before the Gt Yarmouth show.
Posted by Salmon Pastures at 19:12 No comments:

I will learn how I get some of Alans great pics on this blogging thing!!!

Salmon Pastures: Where When Why it all started.

In response to some pretty encouraging posts on the http://www.rmweb.co.uk/ posted by one of the Salmon Pastures layout main-man operators "Alan (westerner) Davies" I thought it may be of interest if I add a little meat to the bones on Alans pretty startling pictures taken at last weekends Southwold exhibition.

The original 8' x 2' shed portion of the layout started life as a test track whilst I was working in Bahrain in the mid 90's,,, In an attempt to keep me out of the various "areas of temptation" Bahrain had to offer I had started to build some of of the locomotive kits I had accumlated over the years and as everyone knows you need somewhere to test your chassis when you are into kit building.

This basic test track then slowly transformed itself into the main shed area of Salmon Pastures.
I built several points which were quickly followed by a signal box to control them,,, then when on leave one day in UK I came across the new range of Wills building basics,,, like brick arches and corrugated tin,,, and a Peco turntable,,, & before long things had progressed rather quickly past the test track stage.

When the time came to leave Bahrain I had 3 options for the layout,,,,
1/ Donate it to the Manama Model railway club who had a membership of one,,,me
2/ Remove all the useable bits and scrap the rest,,mmmmmm
3/ Put it in a box and ship it back to UK
Selection 3 was a no brainer really as I had such fun fiddling about with the layout I didn't have the heart to scrap it,,, and when my wife Helen discovered I was even considering such a drastic action she soon put the Kybosh on that working on the theory that the layout,, like the cats,,, were coming home as they were all members of the family!!!! although I have never actually disclosed how much it cost to ship it back!!!! Not many layouts have KLM Airmiles!!!!!

After getting it back to UK it was quickly back on new legs gathering dust in our cold Norfolk shed and after a chance meeting in our local pub with another modeller, Graham Tandy, before you could misspell Wolshearts,,Walschartz, Walschearts conjugating valve gear I had agreed to get it ready for it's first exhibition to raise money for the East Anglian Air Ambulance.

This is where it really stopped being a test track and became a layout,,,, the basic engine shed was a great plaything in Bahrain but it had a major operational problem before it could become an exhibition layout in that the layout did not have purpose in life as the locomotives had nowhere to go to or come from,, so the fiddle yard then appeared cunningly hidden by Citadel Steels,, at the same time Helens car was evicted from the garage and Salmon Pastures took ownership as it had now outgrown the shed,, which is now the main workshop for my modelling with a few token plantpots in residence just to remind me we really do have a garden as well!!

Why Salmon Pastures,,, I was born and brought up in Sheffield and it was a permanent source of amusement to me as a kid why one of the scruffiest parts in the east end which is the steelworks area was called Salmon Pastures.
The steelworks of course were a relative newcomer in the greater plan of things and the river Don had flowed through this agricultural land for centuries before some clever devil invented steel.
The same water that used to provide a home to the fish suddenly had a much greater importance as one of the main ingredients in the production process of quality steel.

Oh dear Oh dear,,, now Sheffield is famous for one of the largest shopping malls in Europe,,, floods,,, and 2 mediocre footballing teams who realistically have little chance of being really successfull in the financial contest which is todays game of professional football,, not only that but all the volume steelworks have been taken apart and rebuilt in either India or China and the place is now so clean that even the fish have returned to the Don,,,,,mmmmm,,,,,, and nobody has a job in heavy manufacturing,,, NO thats not how I remember Sheffield.

The Sheffield I remember as a trainspotting kid in the late 50's early 60's was filthy, grimy, noisy, smokey, bustling with noisy activity and full of gainfully employed beer swilling workers,,, and that covers most of my direct relatives!!!

Todays kids have computer games and mobile phones,,, I was one of your original anorak wearing trainspotters its all I ever did in the school holidays,,, for me trainspotting usually around South Yorkshire was a way of life,,, Sheffield had 2 stations,, LNER & LMS originally and only 25 minutes away on a diesel railcar was Valhallaland itself [think,,, fanfare by Grimesthorpe Colliery band builds to a crescendo of Entry of the Gladiators,,,,] DONCASTER,,,, I still go back on an annual pilgrimage,, Helen knows I'll get emotional showing her for the umpteenth time where I got chased out of the back of Crimpsall works by some grumpy old devil who was accutely aware just how dangerous the place really was.
It never stopped us,,, paradise IS sitting on a station trolley on Donny Station with an old army side pack full of self made sweaty jam sandwiches and a bottle of luke warm Dandelion and Burdock waiting impatiently for someone to spot & announce to the grotty and spotty gathering what we all wanted to hear,,,,, "Streak",,,, usually followed by,,,, "not Guillemot again",,,,,but occasionally we'd cop one,,, Yes a bygone era that is sorely missed by thousands of boring old Pharts like myself

So Salmon Pastures has become my own tribute to my decidely murky past where coal was king and mother questioned me regularly how I managed to get so dirty writing numbers in a book,,, if she'd ever found out what active trainspotting was really all about she'd have grounded me permanently,,, it was a pretty good grounding for MI5 or the SAS at least!!!!
Risk Assessments,,, hogwash,,, as a 12 year old there were no risks and plenty of numbers to gather just round the next corner or over the next fence,, but we didn't smash things up or vandalise anything,,, why bother,,, you never knew what you were going to see next!!! including the yard foreman!!!!

Having read some of the responses to Alan's pics can I add the following:
To the kind gent who is inspired,,,, believe me when I say I have made many many mistakes whilst modelling,,, but they have usually led me to a better way of doing things,,,, So have a go,,,, you may not be happy with the early results but they will get better,, and,, you cannot improve something which does not exist!!!!

To the other kind soul who advised it was his sort of layout as there were LNER, LMS, Southern, GWR and BR loco's on show,,,
Mmmm,,, at the 3 pint debrief after the first day of the Southwold show the 3 operators discussed that as we promote ourselves as an LNER layout we will probably attract a fair amount of flack from the purists that Adams Well tanks and Halls sitting next to each other in South Yorkshire is pushing the imagination just a little too far. So don't expect to see too much of the same in future.

A couple of random thoughts,,, I have a high threshold of pain for rivet counters,,, probably because it is a well known modelling fact that most rivet counters don't actually build anything,,, I know some do and I take my hat of to you all,,, but lifes too short to take too seriously. I am into modelling to enjoy myself at my level and hopefully entertain the general public at an exhibition.

If you ever feel like complaining about mail order in UK try building a layout in the Middle East where you are approximately 4250 miles from your nearest model shop,, and in light of this experience Salmon Pastures would not have been possible without the excellent services provided by Dave Cleal at Mainly Trains and Alan Bunn at West Coast Kit Centre,,, thanks guys and it was all done without the dreaded VAT as well,,, Oh Happier Days,,,,


I've never blogged before,,,, and might never again,,, if anyone responds I will attempt a reply and I now think I had better finish with a few thankyou's.

To Alan Westerner Davies our newly appointed promotions manager,,, Alan who needs a web page when you can go blogging,,, and have you mentioned yet that we are at the Great Yarmouth show on Sunday 23rd September and the Norwich show in March 2008.

To Graham Tandy ,,, of the chance meeting in the pub,,, he's responsible for getting me back on the exhibition circuit,,,thanks a lot pal,,, I'll see you later,,, and he also does a fine job as our front of house manager dealing with all the special requests like,, "can I see that green one move mister"

To David Orton,,, the builder of all those lovely Southern visitors,,, David and myself first met some 35 years ago whilst serving on detachment with Harriers in Sardinia with the Royal Air Force. I was building a NER Y7 in plastikard on the end of my bed at the time and I think he was impressed with what opportunities railway modelling could offer the mentally deranged,, he took up the hobby and we have been modelling and encouraging each other ever since,, Thanks mate,, for everything,,, as well as the modelling.

To John Quick the modelling coordinator of the Great Central Society,,, one of the few successfull rivet counters I've come across,,, John is the exception to my rule and without his influence I could well have gone astray & into the Brunswick Green, copper and chocolate and cream,, thanks John you snatched me from the jaws of popular obscurity,, and thinking about it you have been encouraging me since about 1962,,, cripes don't time fly when your moving "Forward"

To Helen,, for EVERYTHING.

If you want anymore let us know,,, perhaps next time we can woffle on about all your pertinent modelling questions,,, FAT CHANCE

Posted by Salmon Pastures at 15:20 No comments: 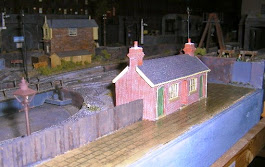